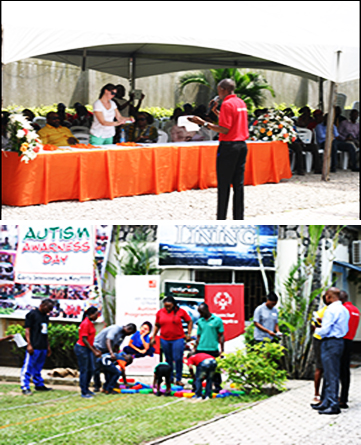 The Special Olympic Sports day which usually comes up biannually to mark the autism awareness day by Special Olympic took place at Patrick Speech and Languages centre, being the first and the leading centre in early intervention programme for individual living with autism marked the day with series of sport activities. The school compound was well prepared and decorated to suit the events.

The event started at exactly 11am, on April 2nd 2014. The children were smartly dressed in their sport wears to display their skills in various athletes to the audience. The programme was organized by Special Olympic officials, though Guaranty Trust Bank Plc, Blazing Trails Team, Parents, and the Medias were also present to mark this great event.

Mrs. Obiagwu opened the event with a short prayer after which the athletes assembled themselves for the national anthem which was led by Segun Talabi and Chidinma Nwanaju.

The welcome address was read by Mrs. Dotun Akande, the Proprietress of the Centre while she further called on Mr. Adeola an official of Special Olympics to talk more on the event. He emphasised on the special skills possessed by individuals with special needs and how they can be helped to maximize their potentials just like what we are doing on this day, he further said it is from event like this that representatives are selected to represent Nigeria in foreign countries.

The pupils participated in various events such as; 100m dash, walking race, lego building, tyre race, throwing of balls, obstacle course and long jump. The pupils won several medals for themselves ranging from bronze, silver and gold. The fun and the excitement cannot be hidden as the parents were also called to perform in some of the games such as throwing of balls, though most of their balls were off target.

Ceceline who was one of the children at the centre, age eight made an outstanding performance by winning the highest medals at this year Special Olympic 2014 and was able to secure a chance to represent the centre at the state level.

The event lasted for about three hours, Mrs. Dotun Akande appreciated the effort put into each activity by the pupils, and she also thanked everyone present for making the Special Olympic Sports Day a memorable one. The circle of friendship song was anchored by Mrs. Makinde after which all the participants formed a big circle and danced around it for some minutes to end the event. A member of the Blazing Trail team said the closing prayer.