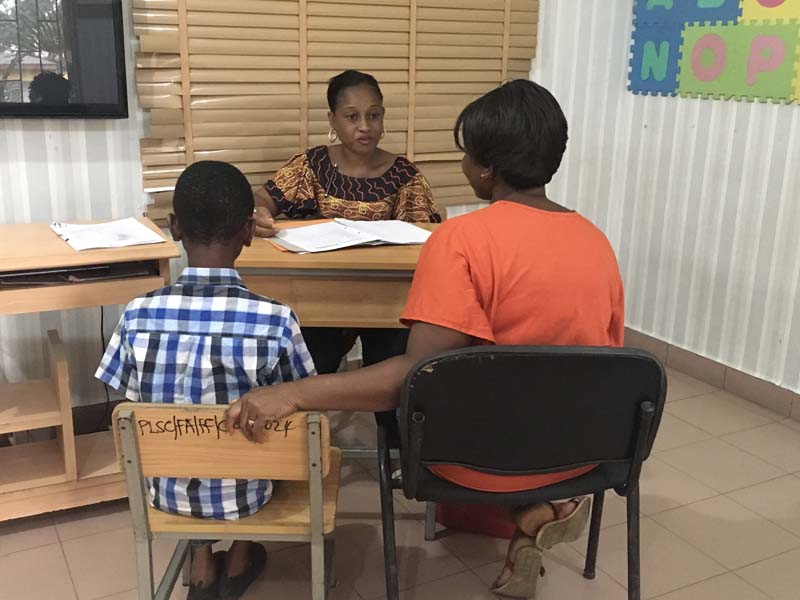 The free consultation follow up held between the 22nd &23rd of March, 2019.  It was apt and educative, as calls kept coming in for enquiries.

Prior to the programme, text messages were sent to all parents who had been in the previous outreach, to inform them about the programme organized on their behalf; phone calls were also put across to them as a reminder of the programme. This came about as a result of the feedback from the huge number of families with children living with disabilities that cannot afford services to help their children live more fulfilling lives. Consequently, this has kept the Centre open for help. We concluded that the best way to help is to give the parents skills that they can use in the home environment to support their children and harmonise the families through constant follow-up. The social media played a big role in our efforts at publicizing the programme.

Staff received parents as early as 7am, with the support of volunteers. New comers were registered while the files of parents who had come before was retrieved and no forms added. This led to the transition of the parents with their children from one consultant to the other. At the end of this, feedback was gotten from the parents at the exit unit.

On the first day there was a large crowd of about 56 participants; 43 old and 13 new participants. Day two, we had 34 participants; 26 old and 8 new participants. They were classified into groups: Down Syndrome, Autism and Cerebral Palsy, hearing impairment and speech-related problems, and medical issues, which ranged from issues with sight, hearing, mobility and sensory.

On the whole, we had 32 cases of Autism, 26 cases of Cerebral Palsy, 27 cases of speech impairment, 2 of Down Syndrome and 2 hearing impaired.  However, out of the 90 children we received in total, one was a medical case and 3 were advised on enrolling their children for vocation; those with nutritional needs were educated on the kinds of foods to eat and what to avoid, while the counselors played the role of a support system, as each parent was encouraged with a piece of advice.

The new families were given the opportunity to join the whatsApp forum, and the old families that have changed their contact were re-added on the forum to enable them follow the progress of their children as well as inform them of what will further help them to acquire more skills on caring for their loved ones living with disabilities.

The parents acknowledged the fact that it was a laudable event and would love to be called upon for a follow-up at anytime.

“I thank God because my son has improved than what he was before. God  bless those that supported the programme.”

And that of a new parent;

“This I must confess is a good idea and a way of contributing to the society. I am pleased with the consultation.”