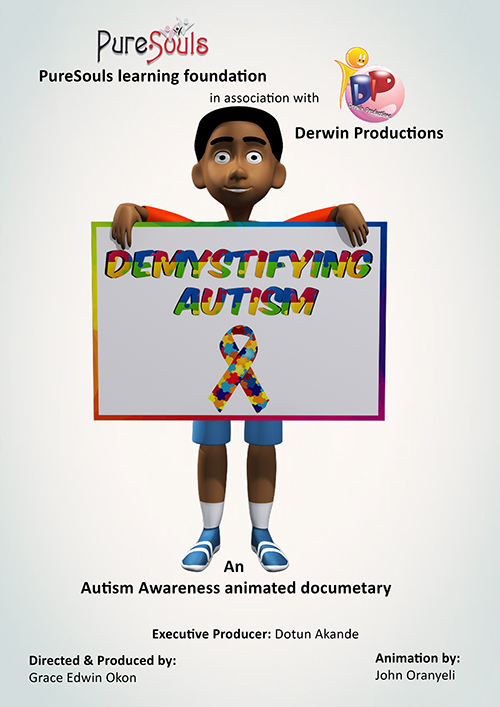 3D ANIMATED DOCUMENTARY
In many parts of the world including some underdeveloped and developing societies, there seems to be an increasing concern and outcry over the rise in cases of autism spectrum disorders In most of these societies ignorance about autism leads to the maltreatment and sometimes death of children and adults with autism.

The only way an ignorant person can be informed is through awareness. Mrs Dotun Akande, a specialist in the area of autism has taken on the responsibility of creating content and spreading the awareness about autism both in Nigeria and Africa as a whole. through the media, films, documentaries and now animation.

Using the platform of her NGO Puresouls Learning Foundation. and support from Patrick Speech and Language Centre, she has recently produced an animated autism educational documentary titled Demystifying Autism.

Demystifying autism is a 7 minute 3d animated documentary, which highlights the signs to look out for regarding autism, it educates people on the dangers that can occur when a child with autism isn’t cared for, and it also points people in the direction of getting “help”.

The purpose for producing Demystifying Autism is to be able to reach a wider audience of young and old people, especially the young ones who enjoy watching cartoons. It is easier to educate children about autism through this animated piece. When children watch the video. they’ll in turn be able to relate better with children with autism and include them in regular activities especially in the school or in the community.

This video is also intended to teach kindness. which is slowly ebbing away from our society, to children and young adults, to understand that different does not mean bad.
The Executive producer and Co-writer of Demystifying Autism is Mrs. Dotun Akande, also co-written, directed and produced by Grace Edwin-Okon, and animated by John Oranyeli.