“…We left the healing process for God. We did our part by enrolling him in a therapy school.”

God will only do what  you can’t do. He won’t do what you can do. We left the healing process for God we did our part by enrolling him in a therapy school. – Mr. AJayi

Inioluwa was born 27th October 2010. I didn’t have any issue (I mean health problems) during his conception and delivery.  At birth he was low weight 1.8kg and had jaundice. The jaundice was a bit high so he was placed under the photo light for 3 days. Inioluwas’s growth was normal. At the age of 2, we discovered Inioluwa wasn’t talking. Initially we thought it was delayed speech because he was our first child, we didn’t know he was suppose to have started talking. However, we noticed some other behaviours that were off, he always wanted to be left alone, he didn’t socialize with other children or people, he was hyper couldn’t sit in a place, he liked arranging objects orderly, he loves opening and closing the doors, he couldn’t hold a pencil or crayon, he couldn’t ride his tricycle, he couldn’t feed himself, he was still using diaper etc.

We took him to the hospital, the doctor told us to do audiology test to know if he could hear after which he was referred to a neurologist and also a speech therapy school was recommended. We were referred to Patrick Speech and Language Centre. He went for a month summer school in 2013 at PSLC. We noticed some improvement. He went back to a regular school we noticed a relapse. We decided to take some steps. First we prayed to God to heal His son. That he should let His name be glorified through Inioluwa’s healing. Secondly, we had to enroll him at PSLC. After prayer we took action. The Bible says faith without works is dead. The word works means ACTION. God will only do what you can’t do. He won’t do what you can do. We left the healing process for God we did our part by enrolling him in a therapy school.

Inioluwa’s was in PSLC for 2 sessions and a term. With the different therapy he was engaged in (sensory, behavioural, speech etc) and God’s intervention, he stopped using diapers, he can eat on his own, he started socializing with other children and people (he actually initiates it now), he can say bye bye, I want water, he stopped licking things etc.

He is back in a regular school, he has spent a term. He won the best improved student in his class. He participated in the end of session activities. He has started picking a lot of words.

I will like to use this medium to encourage all the parents and those that know people with children with special needs not to give up on them. We all have a purpose why we were created by God. Keep praying because it’s only Him that can heal and perfect all that concerns them. Do your part, enroll them in therapy school it helps them a lot, don’t keep them at home, take them out, treat them like any other children, show them love – they need a lot of it, it encourage them, create time for them, be involved in their day to day activities. I know it’s not easy as a parent, I have gone through it and am still going through it, don’t be discouraged. 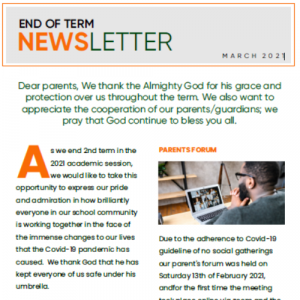 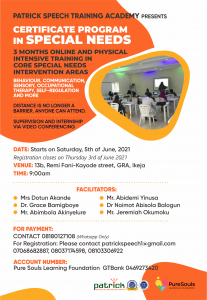 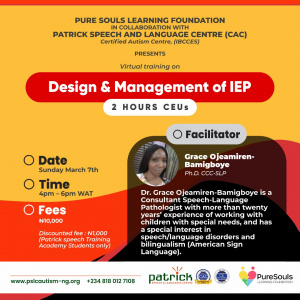