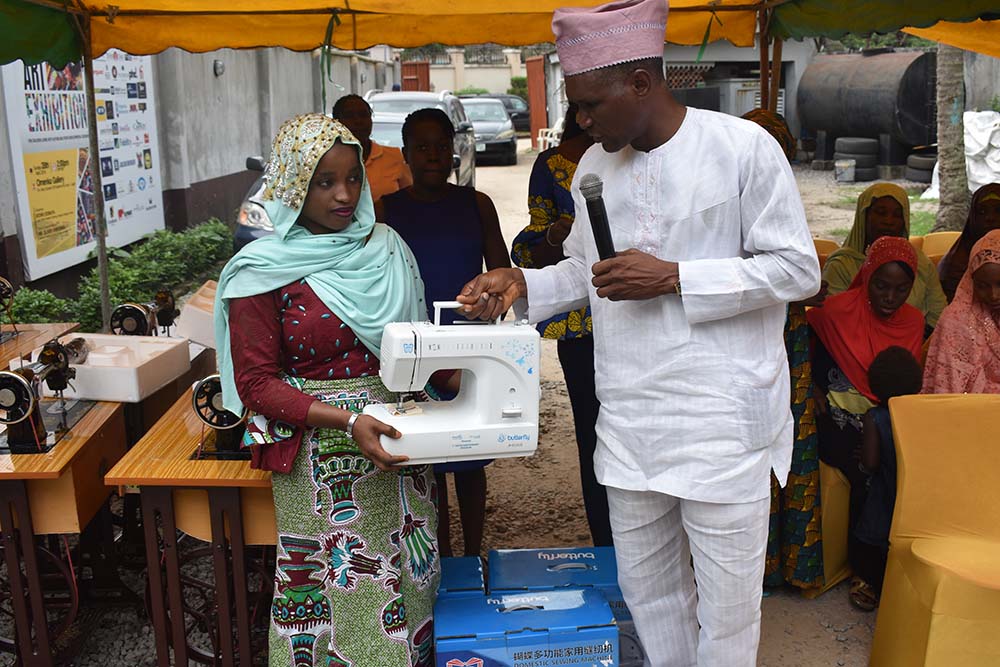 The programme started at exactly 12:00 pm, and was anchored by Miss Edu Itunu.

The opening prayer was given by Mrs. Joan Ibuzo. Miss Edu Itunu opened the program by welcoming all the participants and acknowledging the presence of the invited guests which includes Mr Razaq Lawal from Lagos State Ministry of Youth and Social Development, Mr. Yusuf Haliru and Tajudeen Balogun from Diamond Development Initiatives, Mrs. Delphine Misan Arenyeka, Nonye Nweke, Therapists, NGO’s and Punch Newspaper.

Mrs Akande gave an opening speech in which she spoke on the history of the Gazelle studio and also mentioned in her speech that in her journey in the field of special needs, that she had to approach USADF to support us in which they did. She said the girls did their graduation in January, 2019 and that now is the time to handover sewing machines to them to enable them live and independent life.

She also spoke on how Mrs Delphine Misan Arenyeka helped by sourcing for a donor organisation by the name (Grooming People for Better Life Foundation), who supported us with money.

Two of the girls by name Halima Muhammed and Mariam Abdullahi, were invited to share their experience at the Gazelle studio. They told us that when they started, they didn’t know how to sow, but from the encouragement and training by their teachers, they are now happy for how far they have gone.

They also thanked the Director and USADF for giving them such a wonderful opportunity.

The Marketing officer for the Gazelle studio, Miss Adetoro spoke on how the girls have become masters at what they do. She also said that some of the girls are diligent and committed to work, and also explained that there are two sets of machines (white and black) to be presented. Miss Adetoro also made us to understand the industrial machines (white) will be given to the committed ones.

Mrs Arenyeka was called upon to say a few words. She said that when Mrs Akande approached her and explained this wonderful initiative to her, she was moved as a mother that has a child on the spectrum, and she decided to source for funds to help take the program to greater heights, and that was when Grooming People for Better Life Foundation came into play. She thanked the girls for the time spent with us. She told us that the next level will be to look for an outlet that will sell the products and make income.

Thereafter, the girls were presented with sewing machines.

The representative from the Ministry of Youth and Social Development, Mr Yusuf Haliru admonished the girls to stay focused and not sell the machines. He made them to understand that by selling the machines, they have lost a wonderful opportunity and might even sell their future as well. He thanked the management of Pure Souls for giving hope to the IDP girls.

Finally, the Administrator of Patrick Speech and Languages Centre gave a closing remark.

Power of Collaboration amongst SEN providers

Oral Health Education and Practices among the Children with Special needs