[vc_row][vc_column][vc_column_text]Our 10th year anniversary was celebrated at Harbour Point in Victoria Island Lagos, on the 11th of September, 2016. The program was a significant one, to celebrate our achievements in the past 10 years with parents, families and friends of the Centre. It was also used as an opportunity to raise funds for our permanent site.

The celebration kicked off with an opening prayer and cocktail hour, whereby guests mingled and got to know each other better. Apart from old and current parents, other guests included celebrities such as Kate Henshaw, Nicky Laoye and Michelle Dede who came to show their support for the Centre.

In the course of the program, Mrs. Akande narrated the history of Patrick’s and its achievements thus far.

An interesting video featuring testimonials from the Centre’s old and current parents was presented, as well as an inspirational dance drama performed by some of the children at the Centre.

The fund raising activities started with sales of female outfits made by Vlisco; all the pieces were successfully auctioned off. Paintings done by our talented children were also put up for auction, while guests were treated to a lavish dinner. 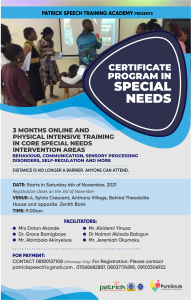 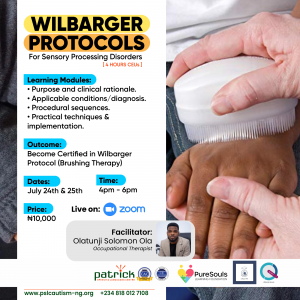